WHO DOES OSHA PROTECT?

The night before he died, Wyatt Whitebread couldn’t stand the thought of going back to the grain bins on the edge of Mount Carroll, Ill.

The mischievous and popular 14-year-old had been excited about his first real job, he told Lisa Jones, the mother of some of his closest friends, as she drove him home from a night out for pizza. But nearly two weeks later he told her he was tired of being sent into massive storage bins clogged with corn.

Jones choked back tears as she recalled the conversation. “I wish I never had to see another kernel of corn for the rest of my life,” Whitebread told her. 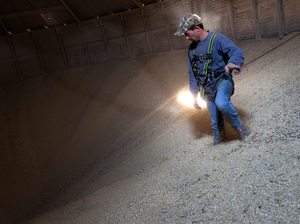 Early the next morning, on a stifling hot day in July 2010, Whitebread joined his buddies Alex Pacas, 19, and Will Piper, 20, at the Haasbach LLC grain storage complex. Piper had begun working there the week before, and it was Pacas’ second day on the job.

The boys carried shovels and picks as they climbed a ladder four stories to the top of the grain bin, which was twice as wide and half-filled with 250,000 bushels of wet and crusty corn. Their job was to “walk down the grain,” or break up the kernels that clung to the walls and clogged the drainage hole at the bottom of the bin.

The work went well at first, with the boys shoveling corn toward a cone-shaped hole at the center of the bin. But around 9:45 a.m., Whitebread began sinking in the corn. He was sucked under in minutes and disappeared. Pacas and Piper also began to sink and desperately struggled to stay on the surface.

Six horrific hours later, only Piper was carried out alive.

“This is one of the most egregious cases we’ve seen in a long time,” says John Newquist, a recently retired assistant regional administrator of the Occupational Safety and Health Administration in Chicago.

“You’ve got the worst of the worst cases,” Newquist adds, noting that one of the victims was too young to legally work in the bin. “The one kid who survived actually saw his friends die. That’s just outrageous.”

Nonetheless, OSHA responded in the same way it responded to dozens of other fatal grain incidents. It levied a $555,000 fine, one of its largest ever. But it later slashed the fine by more than half.

That’s a common practice for OSHA, according to an NPR and Center for Public Integrity analysis of government documents detailing 179 grain entrapment deaths since 1984. Fines were cut 60 percent of the time. More than $9 million in initial fines were slashed nearly 60 percent.

The five biggest fines ever in grain death cases, including the one in the Mount Carroll case, were cut from 50 percent to 97 percent, according to the NPR/CPI analysis.

OSHA says companies have a legal right to challenge and negotiate fines and citations.

“We do everything we can within the current regulatory framework,” says OSHA administrator David Michaels. “We issue large fines. We go after companies we think are scofflaws. We do repeat visits to the worst companies.”

Michaels also says OSHA has urged both state and federal prosecutors to file criminal charges. “We don’t have criminal prosecution powers,” he says.

Even in the most egregious cases of employer misconduct, in which workers as young as 14 were endangered or killed, no one has gone to jail. In fact, Department of Labor criminal referral records obtained under the Freedom of Information Act show that criminal prosecutions are rare in grain deaths.

OSHA’s efforts have not been effective in discouraging employers from breaking the law and putting workers in danger, says Ron Hayes, a retired X-ray technician and building contractor in Fairhope, Ala.

Hayes became a grain bin safety activist after his 19-year-old son, Patrick, suffocated in a grain bin in Florida in 1993.

Stories about grain bin entrapments were jointly reported by Howard Berkes of NPR News and Jim Morris of the Center for Public Integrity. The stories are part of CPI’s Hard Labor series. The stories were also published in collaboration with The Kansas City Star. The newspaper is reporting about potential criminal charges against Kansas City-based Bartlett Grain, where a grain elevator explosion killed six workers.

“If this was the first time that this had ever happened in this country, I could see leniency,” Hayes says. “But because this happens time and time again, year after year after year, they should pay the full fines, somebody should be prosecuted, and until we do this, until OSHA has the backbone to stand up to do this, we will never see this stop.”

The Mount Carroll case is significant to Hayes because some of the same fatal errors occurred 17 years before in the grain incident that took his son’s life. The fine imposed on his son’s employer plunged more than 90 percent.

Hayes says an OSHA compliance officer sought a fine of $530,000 and multiple “willful” violations, which are cited when employers disregard or show plain indifference to the law. A willful violation is OSHA’s most serious sanction, bringing the highest fines and triggering consideration of criminal charges.

But an internal Labor Department investigation concluded that an OSHA area director wrongly downgraded the citations. The fine ended up at just $42,000.

“It is my strong belief that willful violations occurred,” OSHA investigator William Mason wrote in a 1994 memorandum stamped “confidential” and obtained by NPR and CPI. “There is a preponderance of evidence.”

Mason noted an admission by Frank Brooks, the corporate safety director at Showell Farms, the company that employed Patrick Hayes.

“The company had operated under the roll-the-dice philosophy,” Brooks told investigators, according to Mason’s memo. “We will take our chances until something happens to change our minds,” Brooks explained.

Showell managers admitted that they knew “walking down corn” was dangerous and that employees could be buried in grain. They admitted that they knew they were violating company safety rules when they ran power equipment that drained corn from the bin while workers were inside. Federal law requires shutdown and lockout of such power equipment whenever workers enter grain bins because the equipment creates the flow of grain that can suck workers under.

In response, Hayes relentlessly hammered OSHA, which became the focus of news exposes about its handling of the Showell Farms case. Hayes eventually received a public apology from Robert Reich, the labor secretary at the time.

At Hayes’ insistence, OSHA added the phrase “walking down grain” to the list of prohibited activity in grain bins. The agency also sent out warnings to grain storage companies nationwide, and both Hayes and OSHA began concerted safety and awareness campaigns.