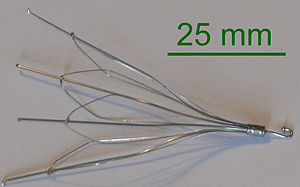 An IVC filter is a medical device designed to prevent blood clots from traveling to the lungs.  The device is implanted into the largest vein in the body leading from the lower extrmeties to the heart.  The filter is used for patients who are at risk for deep vein thrombosis (DVT), which is a condition in which a blood clot forms usually forms in the leg and is in danger of breaking loose and traveling to the lungs and blocking blood flow.

Patients who have had joint surgery are are at a particular risk for the condition due to long periods of immobility.  Although the IVC filte is intended for temporary use, they are difficult and dangerous to remove.  The IVC filter is associated with high failure rates, and are know to break and send small fragments into the blood stream with at times fatal results.

High rates of prophylactic IVC placement have no effect on reducing trauma patient mortality and are associated with an increase in DVT events.

To date there have been 27 fatalities and well over a thousand more non-fatal injuries attributable to IVC filters.  The FDA, www.fda.gov did issue a warning about the device and its propensity to break and result in organ perforation, however did not order doctors to stop their use. It did recommend that the IVC filter be removed as soon as the patient was no longer at risk for DVT.

There is also evidence to suggest that C.R.Bard, https://www.crbard.com, a manufacturer of IVC filters, was aware of the dangers and chose to conceal it, in an effort to get their product to market.

The scholarly study was published in the October 2015 publication – The Annals of Surgery.