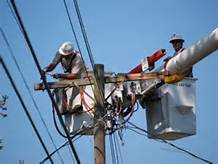 In a 4-3 decision, the Supreme Court of Ohio reversed two lower court judgments ordering Cleveland Illuminating Company (CEI) and First Energy Services Company to pay about $367,000.00 to a motorcyclist that suffered serious injuries in 2010 when a deer leaped from the side of the road and struck his motorcycle and knocked him off the roadway into a telephone pole.

The majority decision written by Justice French noted that the electric companies at trial claimed immunity based upon a prior court ruling, Turner v. Ohio Bell, which found that a utility company cannot be held liable when a vehicle collides with a utility pole located off the improved roadway if the company had obtained the required permission to install the pole and the pole does not interfere with the usual and ordinary course of travel.  Utility poles never interfere with the usual and ordinary course of travel unless the pole is located on the paved portion of the roadway. The court found that multiple requests made by the township and county engineer demanding the poles be moved was not sufficient under the legal standard.