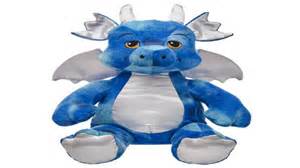 Popular toy store Build-A-Bear is warning parents that one of its toys may not be safe for children.  The store, which has a branch at Easton Shopping Center in northeast Columbus, Ohio, has issued a product recall for its ‘Starbrights Dragon’ amid fears it could pose a potential “choking hazard to younger children”.

The safety fears have been sparked after several toys were found to have a weakness in the seam.

Customers are now being urged to return the toys to the store to exchange for a new bear of their choice. The model number of the Dragon is 422091.

Attorney Mitchell Alter has represented children that have choked on unsafe toys in the past, including a wrongful death claim involving a toy manufactured in China. The federal agency, The Consumer Product Safety Commission at www.cpsc.gov is an excellent source for recall information. The CPSC regulates the sale and manufacture of more than 15,000 different consumer products, from cribs to all-terrain vehicles. Products excluded from the CPSC’s jurisdiction include those specifically named by law as under the jurisdiction of other federal agencies; for example, automobiles are regulated by the National Highway Traffic Safety Administration, guns are regulated by the Bureau of Alcohol, Tobacco, Firearms, and Explosives, and drugs are regulated by the Food and Drug Administration.

The CPSC learns about unsafe products in several ways. The agency maintains a consumer hotline through which consumers may report concerns about unsafe products or injuries associated with products. Product safety concerns may also be submitted through SaferProducts.gov The agency also operates the National Electronic Injury Surveillance System (NEISS), a probability sample of about 100 hospitals with 24-hour emergency rooms. NEISS collects data on consumer product related injuries treated in ERs and can be used to generate national estimates.